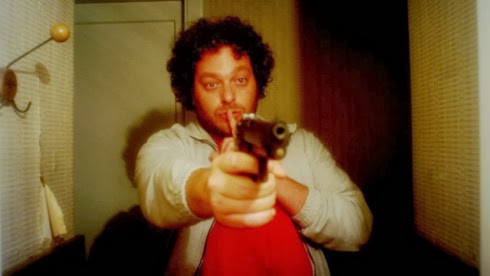 This film is very impressive for many reasons, the first being that it looks spectacular.  Goldberg was shot for under $1,000,000, but it never shows.  Ido Bar-On's cinematography is fluid and beautiful and looks better than many big-budgeted films.  The film is set in Tel Aviv, but Carmi makes it feel barren and isolating, adding to the tense atmosphere.  The nighttime colors pop out - everything has a glow to it giving it a hallucinatory feel, adding to the unease.

Carmi's screenplay is, for the most part, engaging and clever, throwing in a few fun twists, and the pessimistic nature of it is reminiscent of a Coen Brothers movie.  The acting from both Gal and Laor is strong, as they really nail down their respective character's mannerisms and create two characters worth investing in.  While both characters are unlikable, it adds to the amusing nature of the film; since I was never emotionally attached to Goldberg and didn't like him, it was oddly fun to watch Eisenberg stalk him and ruin his life.

While the film has many virtues, it has two flaws: the score and the ending.  I don't know what happened with the score.  At first, it seemed like it was intentionally overdone, like bad Bollywood movie overdone, but as the movie drew on, I realized it was unintentionally bad.  The music undercuts the impact of many of the film's best scenes, but thankfully it doesn't kill them.  The ending was a bit anti-climactic in that it should have been crazier - the energy should have been higher.  The film builds and builds, so by the time it was about to climax, I expected something truly insane.  The ending isn't bad by any stretch, but it just isn't quite as strong as it needs to be.

Overall, Goldberg & Eisenberg is a solid debut film from Oren Carmi.  After winning an award at Fantastic Fest and playing Slamdance, I hope this film gets noticed, as it is a funny, engaging, and well-made movie that consistently transcends the constraints of its small budget.

Email ThisBlogThis!Share to TwitterShare to FacebookShare to Pinterest
Labels: Review